A Beginner’s Guide to Absinthe - The Green Fairy

You have been brought here because you have an interest in seeking the decadent and intoxicating journey that is Absinthe. You’ve arrived at the right place because we are hoping to guide you while you explore this exciting world.

What Is This Curious Green Drink?

Absinthe liquor is a spirit with very high alcohol content and an anise flavor. This drink has always had a mysterious background because it was derived from herbs including the leaves from wormwood. Absinthe with wormwood can be easily distinguished from other alcoholic beverages because of its natural olive green color.

Absinthe enthusiasts know that it originated from Switzerland and the drink was extremely popular among French writers and artists around the 19th century. This is also when Absinthe was given the moniker of "the Green Fairy".

At the time, the green fairy drink was viewed by people as a highly addictive drink due to amounts of a substance called thujone being present in it. Shortly after this discovery, the drink was targeted by many governments the world over. It quickly got banned in most of Europe and the United States. Now that we are standing way past the revival of this curious drink, we sell premium brands of Absinthe with at least 10mg of thujone. In the older days, the thujone level was somewhere between 100mg and 200mg. The majority of Absinthes found in US stores and in some other online stores contains no thujone or very, very low amount of thujone. That being said, if you're after the real deal, as close to pre-ban absinthe as possible, you have to have it shipped over!

In the past decade, the alcohol industry saw a revival of sorts all across the world. The laws around Absinthe were somewhat loosened which made it easy for producers to manufacture and distribute it. Now the industry consists of about 200 brands that are producing Absinthe and most of these are situated across Europe.

Even though we are past this revival, there is still a lot of interest in this drink due to the legends surrounding it. This alcoholic beverage is among the most debated over; this is why we are attempting to educate anyone who wishes to enter the wonderful world of mysterious Absinthe.

In this article, we are going to answer the most asked questions about this green wonder while also tackling a few myths along the way. Let’s move on ahead and prepare you for this delight.

The Green Curse: Effects of Absinthe

All the curiosity around Absinthe liquor is because of its history while some people are truly fascinated in its pour. Some of the more adventurous people that are pulled into this world are attracted because of the enigmatic effects it has on the drinker. You’ll know what we’re talking about once you indulge in this mysterious liquor.

The first-ever name given to Absinthe was La Fée Verte which translates to "The Green Fairy". The drink was given this nickname simply because of the deep love some people began to have for it. Some people had even gone so far as to granting this beverage the status of a muse.

These beautiful nicknames, however, were replaced with some negative ones because people believed that the drinkers’ mental state was affected by this indulgence. All of these effects, however, were quite exaggerated because it had nothing to do with sloth, madness or, in some instances, murder.

The Green Curse overtook Absinthe Green Fairy when this spirit was outlawed in most of the Western world due to its reputation as a powerful hallucinogen. This liquor managed to attract even more people towards it as there was still quite a lot of curiosity around it due to its psychoactive ingredients.

How True Are All the Rumors?

If you think all the hallucinogenic effects are just rumors, then you should know that Absinthe DOES consist of psychoactive ingredients. Thujone is a psychoactive byproduct of a herb called wormwood; if you’re having Absinthe with wormwood, then you better get ready for some surreal visuals.

While we’re on the topic, you should know about the laws that govern Absinthe. These laws hardly pertain to the drink itself and you guessed it – have more to do with the thujone content. The legal Absinthes found in markets have relatively low or nonexistent thujone content. We, on the other hand, stock premium Absinthe brands whose products have a minimum of 10mg thujone.

It is mostly recommended that Absinthe liquor shouldn’t be drunk in excess amounts because of the high alcohol content. This spirit is known to be among the most potent beverages available in the market - a bottle can normally consist of 70% or more alcohol volume.

If you are exploring Absinthe for pure enjoyment, then as the French pour goes, you are in for some jolly mental and physical effects. The experience can be described as a revelatory and calming one. The way you pour it is just the beginning of this enjoyable experience.

Absinthe and water can be seen blending while all the herb extracts in the drink begin diluting in the water. With the first sip, the milky and mellowing louche of the drink will quickly heighten your senses of sight, smell, and eventually, taste too. 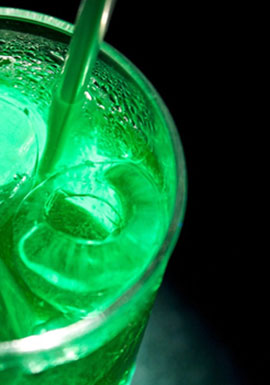 Compared to Other Spirits

Here, all we have to say is that Absinthe is as unique as they come. This drink doesn’t necessarily bring you the same effects of all those illegal drugs but Absinthe hallucination includes awakening your senses in a way that other alcoholic beverages cannot. As you sip on through your drink, we recommend that you listen to your favorite melodies or even sift through your photo-books of beautiful memories. With the increased levels of sensory awareness, true pleasure and feelings are the most common and true effect we have found in our experience. This effect is what made Absinthe very popular among some of the legendary names out there such as Rimbaud, Hemingway, and Van Gogh – among so many more. Still, we don’t want you to believe that Van Gogh chose to cut his ear off because of his Absinthe binge!

You may know a lot about Absinthe but experiencing this liquor might still be a mystery to you. Indulge yourself in the experience of preparing, pouring, and sipping Absinthe. Once you’ve done this, you will be able to speak in the extravagant Green language and you may just have The Green Fairy Absinthe to talk to.

Once you decide on joining the club, don’t forget to let us in on your experience. Share your experience on our absinthe store and bookmark it for the latest updates on Absinthe products and trends. Let us know if you found the green fairy!

How Much Alcohol Content Is in my Glass of Absinthe?

The Green Fairy Flies its way Into the Kitchen