Did you know that absinthe liquor – also known as the Green Fairy – was banned in the United States and other countries for many years?

The potent green spirit was believed to be hallucinogenic and was associated with illicit behavior. Absinthe has always had an ambivalent history, on one hand it was praised as ‘The Green Muse’ by its devotees, and on the other it was condemned by it detractors as a cause of madness and moral degeneracy. People accused the liquor of encouraging loose morals, turning children into criminals, and even inspiring murderers!

There have been wild tales of instant death, family massacres, and intense hallucinations. These all were said to occur from drinking absinthe.

Today, we know that well-manufactured absinthe is no more dangerous than any other well-prepared spirit.

But what is absinthe, and why did people believe these crazy tales of its side effects? Let’s learn precisely how absinthe is made and why people thought it to be so dangerous.

How is Absinthe Made?

Traditional absinthe is created with anise, fennel, and a plant called wormwood. Various recipes also add other herbs and flowers to the mix too.

To make absinthe, the anise, fennel, hyssop, and wormwood seep in alcohol, and then the mixture is distilled in an alcoholic base. This process causes the herbal oils and the alcohol to evaporate, separating from the water and bitter essences discharged from the herbs.

The fennel, anise, and wormwood oils then recondense with the alcohol. The distiller then reduces the resulting liquid down to whatever proof the absinthe is supposed to be. This will depend on the brand of the absinthe or the regional laws where it’s produced.

The absinthe will be clear. You know that absinthe is usually green and why is absinthe green? That is because many manufacturers add herbs after distillation. This is to achieve the classic green color of absinthe we expect from their chlorophyll.

So what makes a distilled absinthe so special? Well, it is produced from freshly dried plants which the distiller will have selected with care, the distiller will supervise the entire operation and the absinthe will be distilled in small batches and rested before bottling. In contrast, a macerated absinthe is produced by mixing up concentrates of essential oils with industrial alcohol and adding food colouring.

Most distilled absinthe is produced in small stills of a few hundred to a couple of thousand litres, there are even craft distillers using stills of less than 100 litres. This means that if the absinthe is bottled from a single batch, rather than back blended, each production run of a few hundred or a couple of thousand bottles will be different to the previous one. Given all the variables such as quality and source of plants and ambient temperature it would be surprising if there were not inter-batch variations and indeed, these are a matter of comment on discussion forums. Whilst the consumer might not mind small variations between distillation runs, large commercial spirits vendors certainly do mind. Whereas variation in the quality of wine between vintages is accepted and understood, variation between batches of spirits is not.

The only way that an artisanal distiller can ensure consistency between bottling runs is to back blend between batches, effectively running a kind of solera system. This is what the large absinthe distilleries did in the 19th and early 20th centuries. Absinthe was stored in large wooden foudres of up to 120 hectolitres capacity and consistency was obtained by bottling from across these. When you consider that in 1905 the Pernod fils distillery in Pontarlier had 60 stills producing 10,000 litres of absinthe per day, you can imagine the storage capacity required. It also explains why the fire at the distillery in 1901 was so devastating. Given that absinthe is still very much a niche product and production runs are so small, few producers these days can afford to do much back blending.

So to summarise, the best quality absinthes will always be those that are traditionally distilled, but may exhibit inter-batch variability. Macerated absinthes that use high quality ingredients and are based on traditional recipes will never achieve the heights of distilled absinthes but they will be more consistent and will be a lot cheaper to produce.

You can rest assured that the whole range of Absinthe Original absinthes is being traditionally distilled in small stills of a few hundred litres.

So, is there any truth to the stories behind the Green Fairy? Is absinthe hallucinogenic?

The truth is that yes, genuine absinthe does contain a psychoactive ingredient called thujone, which is a by-product of wormwood.

In extreme doses, thujone can be toxic. It’s a GABA (Gamma-aminobutyric acid) inhibitor which means that it blocks GABA receptors in the brain, which can cause convulsions if you consume enough of it.

Thujone is present in most species of Artemesia and A absinthium contributes most to the thujone present in absinthe. In the UK and the rest of Europe, the maximum permissable limit for thujone is 35 mg/l (or 35 ppm). In the US, the absinthe content must be "thujone free" (that is, it must contain less than 10 parts per million of thujone); the term "absinthe" cannot be the brand name; the term "absinthe" cannot stand alone on the label; and the artwork and/or graphics cannot project images of hallucinogenic, psychotropic or mind-altering effects.

Thus, the Absinthe you buy in the states is effectively thujone-free.

At the concentrations present in correctly distilled absinthe, whether 'modern' or vintage, thujone is not harmful.

While thujone is in many foods, it’s never in high enough doses to harm anyone. The case is the same with absinthe – there’s not enough thujone found in absinthe to hurt anyone either. 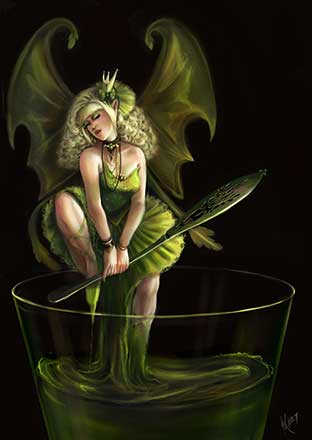 In the past, the wild tales of absinthe hallucinations can't fully be blamed on the spirit in question, technically speaking.

But yes, once you sample genuine absinthe expect to be treated to some surreal visuals. Its high alcohol content and herbal flavors also differentiate it from other spirits.

But today the laws governing absinthe around the world have less to do with the drink itself and more to do with the amounts of thujone contained in them.

Absinthe was traditionally taken with sugar, the so-called absinthe ritual. This is what you may have seen in the paintings and illustrations of the time and accounts for the dozens of different designs of slotted absinthe spoons that were available. The ritual arose because absinthe is unsweetened and many 19th century drinkers had a sweet tooth and were used to the sweetened liqueurs that were popular at the time. Sugar will not dissolve in the 68% to 72% alcohol of neat absinthe so spoons were used to suspend the sugar over the glass while it dissolved in the water that was poured over it. Whether or not you take your absinthe with or without sugar is entirely matter of personal taste so try it both ways and see which you prefer. In tastings we find that tasters are divided 50/50 as to whether they prefer it with sugar or not. Some of our more austere and complex absinthes benefit from sugar which can be said to add ‘middle’ or body to the drink rather than sweetness.

As with any liquor, absinthe must be consumed in moderation and not to excess, especially as the alcohol content is so high. Absinthe is one of the most potent alcoholic spirits available, and it must be drunk with responsibility and caution.

Any absinthe-related deaths are most likely attributed to ongoing alcoholism or alcohol poisoning. Or, it could be down to drinking a cheap and unsafe solution which could have poisonous additives in it.

The famous family massacre story – also known as the absinthe murders – involved a man killing his family in Switzerland in 1905. Despite that the killer had five different types of alcohol in his bloodstream that day, it was the absinthe that caught the attention of the judges and the press. This caused them to blame the massacre on the absinthe and lead to a whole slew of absinthe bans around the world.

In reality, the killer was a long-time alcoholic who had drunk himself and his mind into oblivion day in and day out over a very long period.

When consumed moderately, drinking absinthe can be a calming and revelatory experience. Absinthe diluted with water allows the herbal extracts to be released and contained in the drink. As a result, drinking absinthe in such a way can be a relaxing and enjoyable experience, heightening your senses, smell, sight, and taste.

Compared to other alcohols, absinthe liquor is about as unique as they come. As real absinthe contains thujone, which has hallucinogenic properties, drinking it awakens the senses in a way that other spirits cannot.

And there you have it, you know now how to make absinthe and why is absinthe green. As you enjoy sipping your diluted absinthe, try listening to a song you love or looking through an old photo book of memories. Your senses are likely to increase – the only real sensory effect of absinthe that we know of. That’s why the famous green liquor was such a hit with renowned artists such as Van Gogh, Hemingway, Rimbaud, and many others.

Are you new to drinking absinthe, or want to learn a bit more about this popular spirit? Then check out our beginner’s guide to absinthe to get the lowdown.

Incredible Stories From the History of Absinthe

How Much Alcohol Content Is in my Glass of Absinthe?

A Beginner’s Guide to Absinthe - The Green Fairy

Try These Absinthe Cocktails If You Feel a Little Adventurous