Incredible Stories From the History of Absinthe

Most of us believe that absinthe is exactly what Albert Maignan depicted it as in his "Green Muse". The mind-altering effect of this alluring drink, however, wasn’t just the theme of a painting; it also managed to become a reality for some – or did it?

Historically, artists, poets, writers and of course, the occasional madman have indulged in absinthe - the magical green stuff - all of whom, arguably, seem like one and the same. There aren’t so many drinks out there that have inspired so much allure, mystery, and controversy at the same time!

Absinthe has been touted as one of the hallmarks of society while some blamed it for its downfall. Either way, it has a reputation that is unparalleled. There, however, may be a slight chance that incidents involving this green drink aren’t as provocative as they are made out to be.

Speaking of provocative, have you heard of the graphic novel From Hell and its subsequent film adaptation starring Johnny Depp?

This new story about Jack the Ripper may have made you curious about absinthe drinks. If it has, then you need to read what’s next!

The Absinthe Murders and Jean Lanfray

One of the things you may have surely heard about mysterious absinthe is that it’s associated with questionable hallucinogens. This is one of the reasons it was such a hit with the bohemian crowd. This hallucinogenic property had been quite a mystery for decades; it gained real notoriety once they found absinthe’s connection to some unfortunate events.

A terrible murder at a rural town in Switzerland called Commugny perpetuated hate for Absinthe drinks. All the way back in 1905, Absinthe liquor was on the rise and the popularity of the green fairy was at its peak. This is also when Jean Lanfray, a local peasant, had indulged himself in a little too much.

After his binge, Lanfray returned home to his wife and children only to get in a drunken argument with them. Well, as you may have guessed, the man killed his family before shooting himself in the head. But wait, that’s not all! It gets worse.

When the police arrived at the scene, they not only found that Lanfray had survived the fatal shot but he was also completely conscious. Some believe that this was because of the dark mysterious powers of absinthe liquor. Lanfray survived only to hang himself later in jail.

Degas and Manet Cause Scandal

If we took you a little further back in history, absinthe had already managed to become a favorite of the Bohemian rebels. This is also when famed artists Degas and Manet chose to feature absinthe drinks in their works. The reaction of this, as you may have guessed, was pure outrage.

One of Degas’ most popular paintings is L’Absinthe; you don’t need to be a history major to know which one we’re talking about. This painting portrays a woman staring blankly into her glass of Absinthe with a clear depiction of overwhelming depression hitting her.

When this painting was debuted for the first time, it had been quickly deemed as a portrait that depicted wicked, repulsive souls that were only capable of vice. Manet, on the other hand, had gotten a very similar reaction to his work "The Absinthe Drinker".

This painting was among the first major works of art from the artist and he chose to select an alcoholic man in rags as his model. As you may have guessed, people wholeheartedly rejected his debut painting along with the artist’s muse himself.

It seems as if no matter how fine the work of art was in the past, people completely rejected so much as a painting of absinthe drinks or even just a bottle! 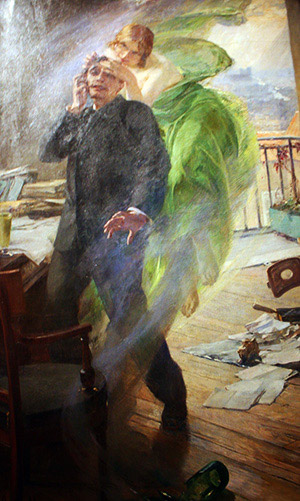 There is a very long list of controversial claims made against absinthe drinks. Most of these were the result of psychiatrist Valentin Magnan’s experiments. While this physician-in-chief was quite respected by society, he had chosen to study not only absinthe but so many other addictive substances such as cocaine.

During his study on the people who were admitted at his asylum as alcoholics, he found a lot of common characteristics among them. Due to his study, he came up with the hypothesis that alcoholism can be a hereditary trait and may also be the reason behind the steady decline of the French culture.

To reach these conclusions, he compared reactions of alcohol on animals. One batch of subjects received simple alcohol doses while the other received doses of wormwood oil – which is one of the controversial and most important ingredients in genuine absinthe. While the animals that received alcohol doses simply got drunk, the second batch was found to develop systematic seizures!

Absinthe of The Past Contained Thujone

Some present manufacturers (mainly those based in the US) falsely claim that absinthe of the past contained low amounts of thujone in it. This is false advertisement because pre-ban absinthe has been found to contain up to 260mg of thujone. These manufacturers rely on the notoriety of real absinthe as forbidden and market their product under the slogan, 'prohibition is finally over!'. They may even start saying soon that absinthe of the past contained no alcohol! How ridiculous!

This false claim is debunked by Dr. W. Arnold from the University of Kansas who said the following in the Boston Herald: „Perhaps to raise the titillation for the current product, and to increase sales, they now claim that the "old absinthe" also had very little thujone in it!“ Dr. Arnold should know his stuff, since it was he who first tested pre-ban absinthes for thujone and other terpenoids. We already know what he found. Old, pre-ban absinthe sometimes contained up to 260mg of thujone!

Experience All The Lore For Yourself

No real absinthe (understand absinthe with thujone) will make it to the States anytime soon. For the real deal, you have to travel to Europe or have it shipped over. One of the best genuine absinthe brands available are Absinthe Original, King of Spirits Gold with 100mg of thujone, and Absinthe Bitter Spirit. They’re all made with wormwood and are available to buy from our Absinthe Liquor Store where the standard is worldwide express shipping and 48 hours order processing!

At Absinthe Original, you can browse through genuine brands that have been manufactured using the historical recipes of 70%, 60%, and 45% alcohol volume. You can also find everything you need to learn about absinthe history, absinthe fountains, absinthe cocktail recipes, and so much more.

The History of The Pocket Flask - Origin, Shape & Prohibition

Absinthe Throughout History, A Bizzare Story Hard to Believe

Myths, Reality And Absinthe - The Truth About Thujone